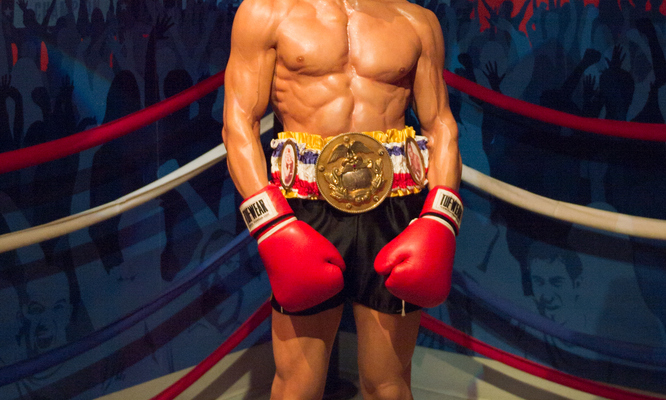 Later Rocky films are plagued by mediocrity, but earlier films in the franchise were entertaining. In fact, the first Rocky film won Oscar for best original screenplay and for a work with accomplished script, it is a well-deserved award. There are a few things that we can learn from Rocky as a character. He is a complex central character, who has unique qualities and is quite engaging. The first Rocky film is essentially a drama, not a boxing film, with a well-drawn central character. He has various conflicts in his life and he is still able to overcome the obstacles. He continues to negotiate any tide of hostility around him. In a way, his character is able to build a level of sympathy among the audience. The film shows us the harshness of the world we are living. Rocky worked as a debt collector, but by refusing to break the a guy’s finger, he is jeopardizing his job. Stallone was able to humanize his character.

One good thing about Rocky is the presence of a critical facet in the storytelling. Through an awareness of Rocky’s compassions, vulnerabilities and flaws, we have a character that we can relate to. If the central character is successful enough, he or she will act as a mirror. The audience will correlate themselves and things that happen in their lives to the character. Many people think that they inhabit a world that is clearly unsympathetic to them and this is something that they can also see from the beginning of the film. Rocky is a character who is also a victim of ill-will and misfortune. The script writer and director were able to create a story that is interesting enough and they can do that without alienating the audience. We see that Rocky comes across as a generous and well-natured individual, even in challenging times. His reactions are humane and believable. These are essential to get the audience easily on his side. He has the capacity to absorb everything around him with good grace and some amount of humor.

The film feels like a great three dimensional drama and we are able to observe characters from many different points of view. Rocky comes across as being quite unique and he doesn’t play up to a stereotype of a tough-looking guy. He has complexities that also happen to real life people. It is quite unique to see a boxer, as the masculine character to touch with internal emotions. This makes us think that Rocky feel like a real life individual, although he is clearly fictitious. Any film maker, script writer and director should learn from Rocky, how he could appear like real living and breathing human being. It is just a fiction, but Rocky manages to bring itself closer to the ordinary and real life experience, while being dramatic and extraordinary in its storyline. These are things that cause Rocky to appear like highly sympathetic and fully believable central character.